"[It is very important that] any section of the work, if removed from the whole, be interesting in itself." 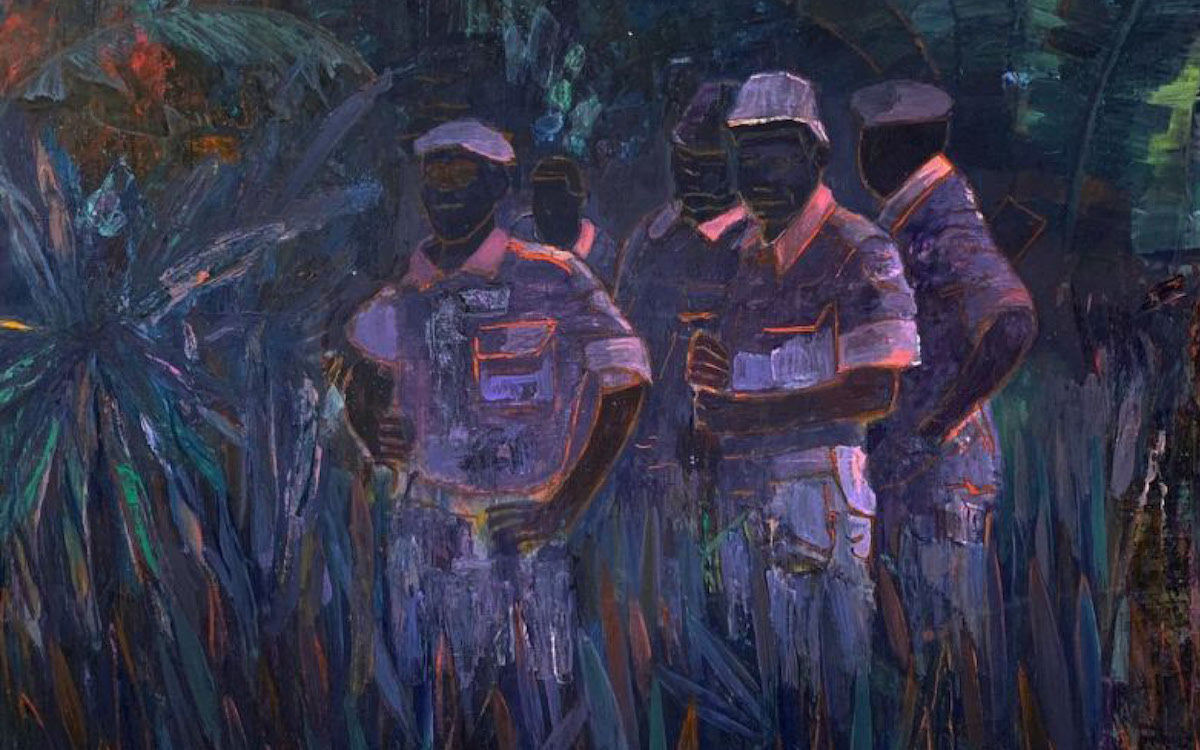 Today, we'd like to introduce you to
Hélio Fernandes Luís @heliofluis

How did you develop your style and what do you wish to accomplish by following this technique in your work?

A painting usually starts with an ideia, a visual idea. I then do some research, I may search for artworks with a certain mood or feel in the area of what I’m trying to achieve, and photographs, or film stills. Sometimes I also get photos of different objects related to the subject matter. These can be used for reference during the painting process.

When the painting in itself starts, I try, as much as possible, to introduce different ways of getting the paint to the canvas, with the goal of being surprised by what’s happening on the surface. That’s always the best feeling, when something unexpected and interesting happens. And these unexpected things (the famous accidents) can alter, sometimes, the course of the painting substantially. Of course, as you rely more and more on these chaotic things the paintings tend to take longer to finish, at least in some of the paintings. In this sense, you do develop a technique of sorts, but part of my process is to go against a fixed technique, finding new ways to surprise yourself.

How has your practice changed over time?

In recent years (since 2017), I started to use much larger canvas (from sides of 2 meters up to 5 meters) and to use much more palette knife and less brush. I use mostly oil paint but I also started to use a bit of acrylics (in the early stages of the paintings) and enamel paint, which I used because I wanted to drip the paint in a few paintings.

These things combined make the paintings less constrained, freer, less precious. The larger canvas combined with the palette knife also permit larger gestures in the handling of the paint, which tend to produce more interesting surfaces. It is very important that that abstract aspect of the work, the paint in the surface of the canvas, that it works on its own, independent of what it may be representing. That any section of the work, if removed from the whole, be interesting in itself. That the collection of marks, splattered paint or whatever it is on even the smallest section of the painting, have a life of its own.

This change in technique coincided with an increase in focus in terms of subject matter. So the progress in recent years has been a mixture of new subject matter and news ways of painting.

What themes do you pursue and why?

The paintings produced in the last 4 years or so have mostly dealt, in some way or other, and even if this is not immediately apparent, with aspects of the Portuguese colonial past. This may not appear to be a subject with which I have a direct personal connection, especially since the colonial period ended officially in 1974, which is some years before I was even born. Of course I know a lot of people who lived in the former colonial territories, but that is only a secondhand connection.

What makes me go back to this theme, and which I guess can be called personal, is that, being born in Portugal, and especially living in Lisbon for so many years, the allusions to these exotic places are everywhere. And the memory of these exotic places was quite present in the country’s collective imaginary, as I was growing up. So much so, that, as a kid, I drew a lot of these imagined, far away, exotic places, that I kept hearing about in school, in books, in peoples conversations, on films and tv.

So the paintings of jungles, which are all imagined places, try to capture a certain mood, almost an idea of a place. And when you grow up you start becoming conscious of the dark aspects of this history. Of course, those darker aspects tend to find their way to the paintings as well, even if obliquely. Never or rarely by direct representation, but by mood, certain objects in the painting. This mood tends to happen naturally in the process of painting, and pursuing it is the most difficult thing, and that ends up being more important that almost anything else in the process of painting a picture.

This is why so many paintings take so much time, and why each canvas tends to have a lot of different paintings (or very different variations of the same painting) buried beneath each other. This adds a lot of texture and interesting tactile things, layers, that are very important to the work. In that respect, a lot is not seen or felt by just seeing them in a small screen.

Art in the Age of Instagram:
An artist’s best friend or worst nightmare?
Is seeking validation from likes and followers killing or reinforcing creativity?

I came to Instagram quite late, only about a year or so ago, really, even though I created the account a while before that. I started posting because I had a show at Zet Gallery in Braga, Portugal at the end of 2019, and they sent me a banner for Instagram to promote the show and I just decided I would post images of the show, of the paintings on the walls, to help with the promotion, even if, because I hadn’t posted anything at all, I had very few followers.

One of the greatest things of Instagram, in terms of Art and the Art world for me, is that you really find artists you wouldn’t otherwise. It’s great for finding artists and if you start exploring it you start seeing trends and you can form a mental picture of art now, or painting now, since I naturally tend to search for painting more than other mediums. Much easier than going to the webpages of the more important galleries etc, and you get a more complete picture because some artists aren’t in galleries, or not in the most famous ones.

Of course, this is only based on photographs of works, which is not at all the same as seeing the works in person. And it is great to get feedback on your work as well, of course. In terms of getting validation from likes, that’s another story….however great it is to get encouragement for what you’re doing, it’s fundamental to know where you’re going and not put too much emphasis on what everyone else is saying.

Who are your biggest influences?
Was there a particular artist or work of art that struck you in a way that contributed to what you do today?

I have always had a lot of different influences. I wanted to paint in the first place partly because I loved certain paintings and certain painters so much. I always travelled to see art from an early age. And if at a certain point I started to seek more contemporary art than older, more canonical painters, I always go to the art museums when visiting a city. And classical painters still influence me today, of course. Among many I would have to mention Goya, Caravaggio, Chardin, Manet.

The end of the XIX century and the transition to modernity is an epoch that still influences a lot of what is done today in painting, and especially the revival of figurative painting in the last decades. I love a lot of painters from this period, with Gauguin at the top, and also Munch, who is a bit younger than Gauguin as is Vuillard, which I also love. I was lucky enough to see all the major ehxibitions of Gauguin in the 00’s, in Paris, Madrid and London. It was great to see live so many of the paintings I had loved since being small.

Very important painters for me are Francis Bacon, Giacometti, Hockney, Anselm Kiefer, Gerhard Richter, Paula Rego. There are actually so many painters in the XX century that influenced me, as well as in the last years. Too many to mention. Peter Doig come to mind of course. I saw his work first in the Pompidou many years ago, one of his canoes, before I knew who he was. I should also mention some really great young Portuguese painters like Pedro Vaz, Hugo Canoilas, Gonçalo Preto, Rui Moreira, Barbara Assis Pacheco, and others.

How do you see your art developing in the coming years?

I recently moved to the countryside, just north of Lisbon, and this, I expect, will have a great effect in my development. I left my studio of the last 8 years in August last year. It was located in the old part of Lisbon, it was a building from the beginning of the XX century. It had a great view of the Tagus river. This place was very important in my development. The building itself was quite special and several of its apartments were rented to young people from all over the world. It was quite diverse in terms of the people and there were great parties.

The gentrification of these old parts of Lisbon really accelerated in the last years, culminating with Madonna moving to our street two or three years ago. That’s when you know that your rent won’t stay the same for very long. The building was situated in Rua das Janelas Verdes which is a famous street in Lisbon. It’s where the MNAA (Museu Nacional de Arte Antiga) is situated, which has the national collection of Art before the late XIX century. It has a great Bosch and a great Durer, and a few other great paintings. So, Lisbon, great as it was, was getting a bit expensive, a bit too gentrified, and not so much fun as it used to be.

This new house, in the country, permitted me to realize an old dream. I was finally able to design my studio. It is based on an old barn, that we renovated. But what made me want to move, and what really got me excited with the place was the house’s garden, which is actually a small forest. Having so many trees to take care of is actually a great responsibility, but it’s getting me closer to nature, after living in the city for so many years. I am learning a lot about trees and vegetation.

These are already starting to show up in the paintings, slowly. Since the new space is much larger than the old studio, I will be able to tackle bigger sizes in much better conditions. In parallel to these new big paintings, I’m also dedicating more time to smaller formats. This new place will definitely impact the coming work, its actually already happening.