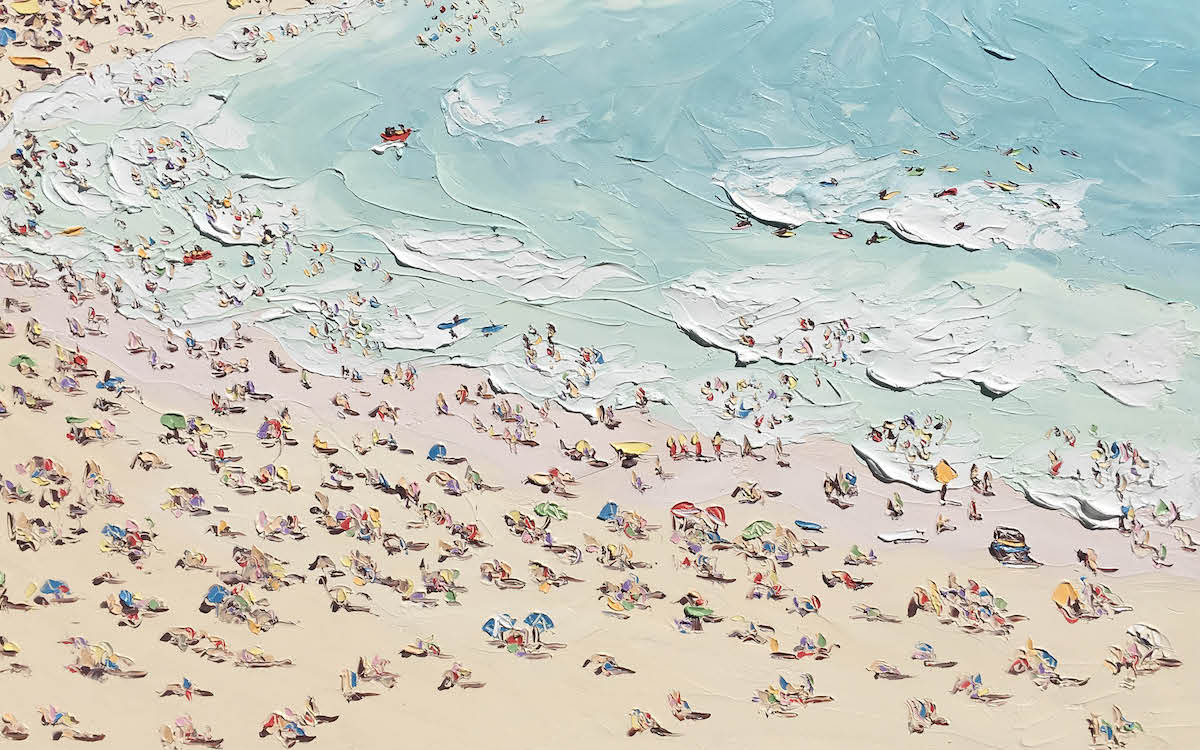 'As Director and Curator of KAB Gallery (Australia), I have had the pleasure of working with Australia’s leading artists. Sally West has been part of KAB Gallery since the beginning and I am proud to not only represent her art but also take joy in the friendship we share', says Kerry.

I admire her dedication and commitment to her art practice as well as her constant drive to create something new. Sally regularly visits Australian beaches to paint 'en plein air' (in the outdoors on location), and throughout her art career, she has worked to perfect the process. It’s an art she is constantly fine-tuning as she adapts to exciting new coastal locations, viewpoints and weather conditions.

Throughout last summer I was fortunate to join Sally on some of her beach paint-out days. It was amazing to observe first-hand her unique and special painting technique as well as learn all about the significant planning work involved in preparing, researching and facilitating an 'en plein air' creation! In the early days of the beach series, her eyes and easel were focused at the iconic Freshwater beach (colloquially referred to as “Freshy”). A well-known coast for its great waves and white sandy shore, this beach is located in Sydney’s Northern Beaches area on the east coast of New South Wales. Freshy is also a special location for Sally personally, as past generations of her family have visited beautiful Freshwater Beach throughout their lives. While this was a great location for several summers, Sally has been heading to various other exciting beaches to further develop the beach series.

It wasn’t an easy task to join Sally West on her painting days, in fact, it was amazing to learn how each day was carefully planned and organized well in advance. After all the planning it could only be confirmed in the early morning depending on the final weather reports. Wind, tides, midday temperature highs and afternoon lows all came into consideration before we even picked up the car keys. One day we almost canceled due to a potential rain forecast but decided to risk it in the end – just as well because not a single drop fell and conditions were perfect! In addition to these weather concerns, there are accessibility, safety and of course viewpoint issues to consider. 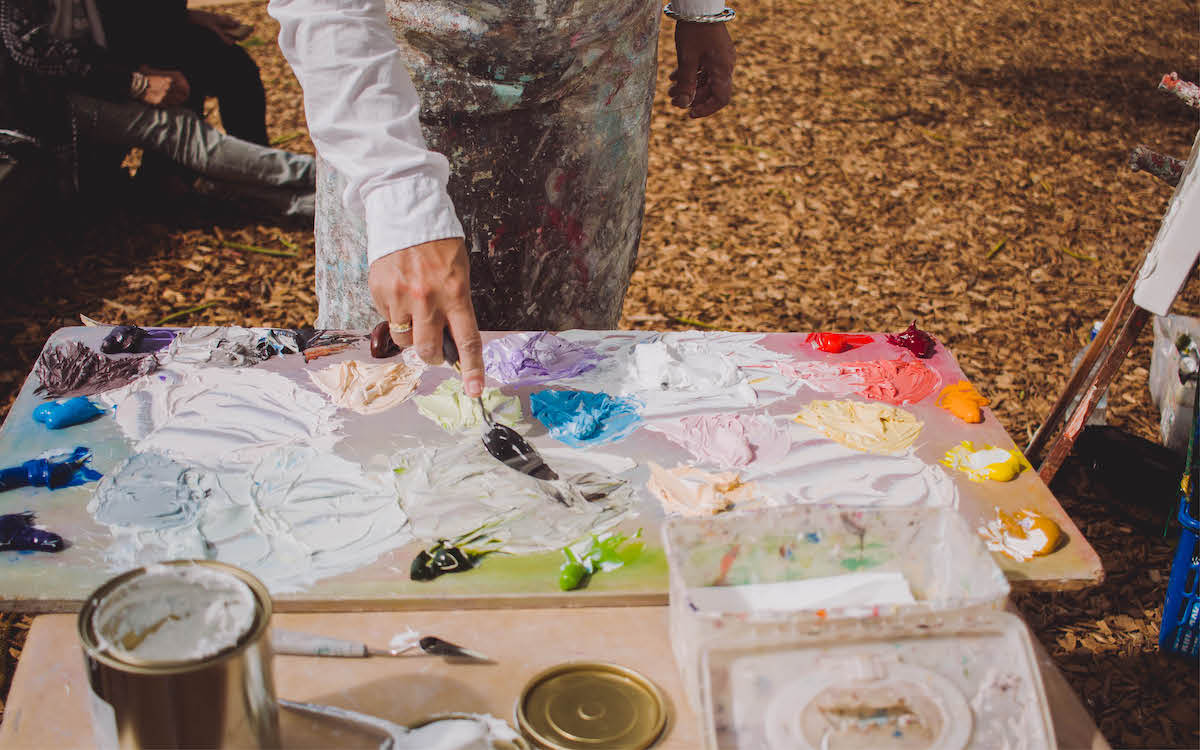 The very basis of the general composition is established by the shorelines, perspective, the tidal positioning of the surfers in the waves and swimmers enjoying the beach between the iconic Australian surf life-saving flags and patrol. Then there are the organic elements based on the clusters of sunbaking beachgoers, swimmers and water swells and currents. It’s mind-boggling to imagine how Sally West plans out commission paintings with all of these crucial elements to consider!

Alongside the environmental concerns when preparing to paint 'en plein air', there is the fact that Sally needs everything an artist would typically have at hand in their studio ready and available for her to use on-site. The carefully considered kit of art essentials neatly and systematically packed into cases and baskets with her easel, palette knives, fold up tables, palette, trolley, bottles of water and a packed lunch, camera, 50+ UV sunscreen supply, cleaning materials as well as her giant 1 metre x 1.5 metre canvas (with several smaller ones in case winds were stronger than reported) all ready stretched and primed for lashes of her oil paint.

Her clothes were carefully considered too – fully covered in tightly woven cotton (a habit learned living in harsh Australian rural conditions), hat, sunglasses, boots for trekking through various scrub and terrain for the perfect birds-eye viewpoint. On arrival at the planned viewpoint it was time to set-up the easel and secure the canvas (there could be nothing worse than losing a canvas over the cliff edge!) Once her equipment was set up she began mixing the paint supply into the perfect hue and tone. She is a perfectionist and constantly looks up at her landscape subject ensuring the colors were true and correct throughout the process. Finally, the first stroke is smeared across the canvas forming what would be the shoreline edge of the sand. 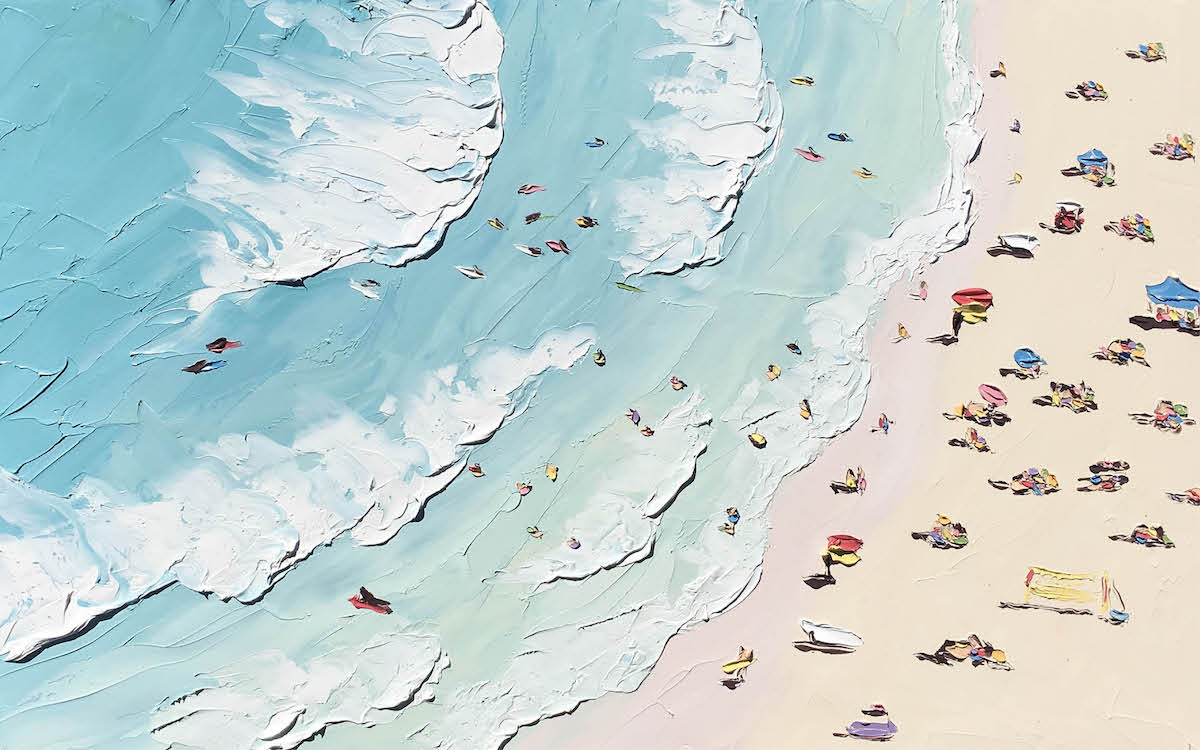 Each time I watched Sally West work this was her first step. It was completely obvious that with all of her years of experience as a 'plein air' traditionalist, she has managed to train herself to work with complete focus and confidence. Her base color-blocked across the canvas set the perspective and ambiance of the painted scene, but the painting really took shape much later in the day. With several more layers of thick oil paint using a difficult and skilled method of wet-on-wet layered painting the landscape appeared with detail. It was so specific to what was before us in the landscape, I could match each sunbaker on the sand to hers in the canvas so clearly. I almost wished I was out there on the sand being immortalized within this unique and captive artwork! Sally worked tirelessly to complete the paintings in each sitting and didn’t pause at all throughout the day. Completion was vital! It was a treat to watch the painting take shape throughout the day – from the initial color blocked area of sand and water to the final SW being etched into the lower right-hand corner of the canvas paint.

You can admire her representations of the waves breaking on a beach, pushing water towards the shoreline. You can also see the way that the water reaches the shore and finds a way back out to sea flowing downwards into deeper channels in the surf zone. These representations appear abstract up close but from afar the water paths become clear. For this series, Sally West has painted beach studies in various sizes, each presenting a section of the aerial view. Canvas sizes range from 25x25cm miniatures to oversized 150x150cm pieces. All the studies can be displayed beautifully as single pieces or grouped together for a cluster hang.